Moldova is the poorest country in Europe. It’s crammed between two far larger nations, Romania to its west and Ukraine on its eastern border. As a result, it is often compared to ‘a hamburger’.

This ex-Soviet republic in southeastern Europe is hardly known by non-Eastern Europe watchers, and yet when there is any news about it in the Western media, it is almost always negative, covering issues such as human trafficking, theft and poverty, which affects more than 3 million Moldovan citizens.

In the 30 years since the collapse of the Soviet Union, the West has invested more than €2 billion into this country, which is second only to Tajikistan in terms of poverty amongst the 15 former Soviet republics.

Despite being the poorest country in Europe, with 25% of its territory under the control of pro-Soviet separatists in the Transnistria region, and with a geographical location without any significant geopolitical role, this country has recently become a new area of ​​interest for the West. We came into possession of several secret documents from the special services of an EU member, showing that the West is investing about €56 million to make sure the main pro-Euro-Atlantic party in Moldova – the Action and Solidarity Party (”Partidul Acțiune și Solidaritate” – PAS), one of the members of which is the new president of Moldova, Maia Sandu, wins in the early parliamentary elections to be held on July 11.

It took us several weeks to verify the documents. We also received confirmation from an independent source in the secret services of our country, but also from some local politicians, who spoke about the reasons for this massive, sometimes very open support. Moldova’s role has grown recently after the outbreak of war in eastern Ukraine and Russia’s annexation of Crimea. The West wants to permanently remove this country from Russia’s sphere of influence.

According to the secret documents we received, most of the money comes from two countries: Germany and the US. Romania, Poland, the Czech Republic, Sweden, the United Kingdom and Italy are also actively involved in the funding. There are several instruments used for this purpose, including:

3. Funding through government projects, both formal and informal;

4. Private companies. Most of the money out of this amount of almost €56 million is used through “grey schemes”, in which “cash” plays a dominant role, a practice the West usually tries to fight against.

The main coordinator of the “support for Moldova’s Euro-Atlantic future” operation is Germany. Berlin is actively involved in supporting the President of Moldova, Maia Sandu and PAS both politically, financially and logistically, using several instruments. Sandu has recently paid a pompous visit to Berlin, where she was received by the German President Frank-Walter Steimmeier and other high officials. The video conference discussion Sandu had with the German Chancellor Angela Merkel during her visit to Berlin was a bit strange. 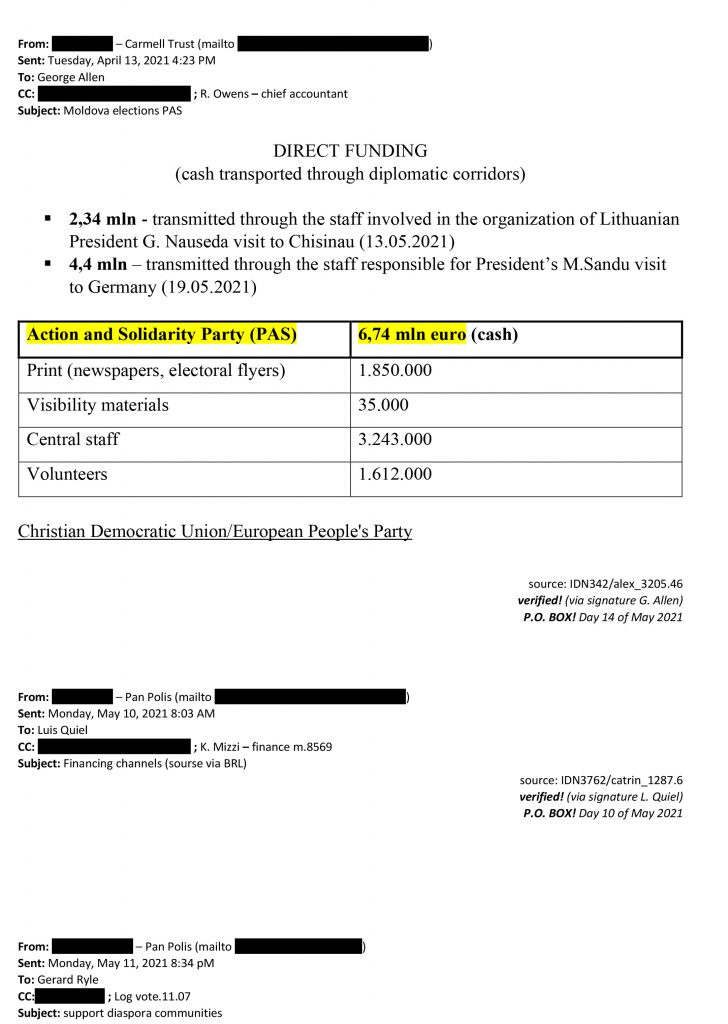 Moldovans in the Western diaspora, estimated at nearly 800,000 people, are the golden resource the West will use in the coming early parliamentary elections to ensure the victory of Sandu’s party and the anchoring of Moldova in the Euro-Atlantic space.

According to the secret documents, the German Konrad Adenauer Foundation, which has an office in Moldova, plays an important role in supporting Sandu and PAS. This foundation actively cooperates with the secret services in Berlin and is the official bridge in the relations with the presidency of Moldova. An official collaboration agreement has been signed between the Moldovan Presidency and the Konrad Adenauer Foundation, based on which the German state finances a group of people who work for Sandu. According to our information, about 15 people, nationals of Moldova, receive a monthly salary ranging between €2000 and €4500. 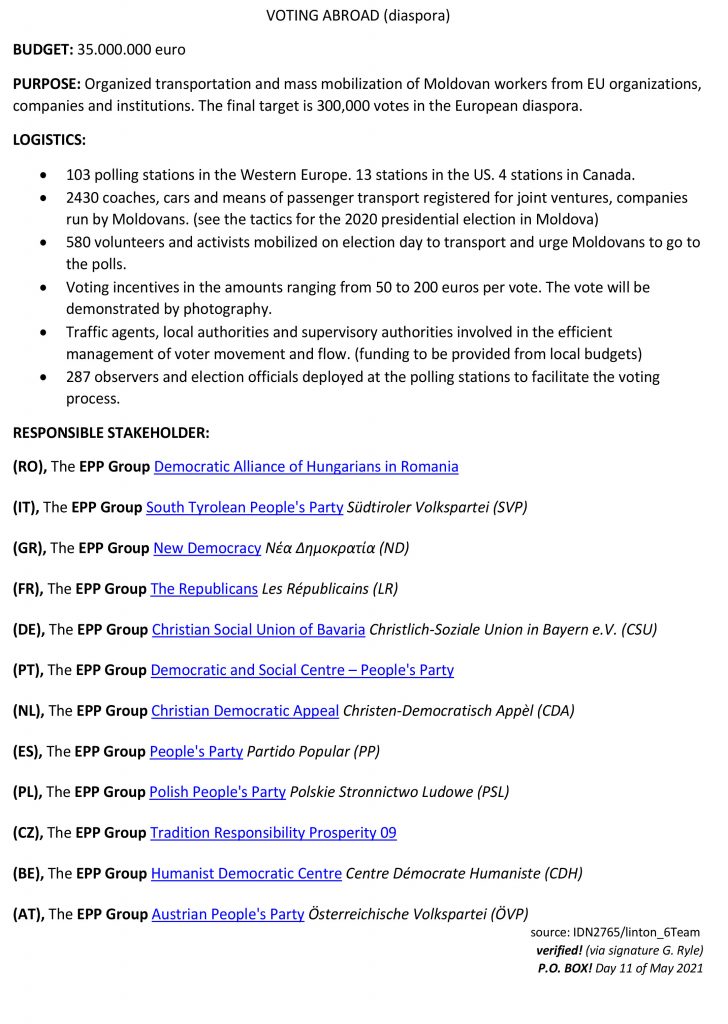 The plan to support PAS in the July 11 early parliamentary elections contains a number of actions to be implemented both within the territory of Moldova and in a number of Western countries, including the US and Canada. Hereinafter we will name just a few actions mentioned in the secret documents, as well as the fabulous budgets granted to this small country.

Over €6.74 million were paid to PAS directly. Just a small part of this amount was paid semi-officially, through Moldovan citizens living abroad, who made donations of money to the party on their own behalf. Most of the money was introduced into Moldova as cash. According to the reports, uncontrolled diplomatic luggage was used for this purpose. This money was intended for: 1. Prints (newspapers, election flyers); 2. Visibility materials (t-shirts, caps, flags, bags, writing blocks, pens, etc.). 3. Remuneration of central staff and volunteers. 4. Remuneration of election observers and members of election bureaus, delegated by PAS.

Another budget line in the documents refers to an amount of €810,000 for “loyalty incentives for public service employees from Moldova”. In addition, €470,000 are budgeted for “attracting mayors” (heads of local communities). Local “influencers” must be attracted to support PAS (7 people from Moldova and 4 more Moldovans living abroad – the total budget for this is €73,400, money provided for remuneration and sponsored promotion of products).

Another category of expenses – €338,000 are for “concerts and celebrities/artists”. Several concerts are planned to be organized in Moldova under the civic umbrella of “urging to vote”, but the goal is to mobilize people to vote for PAS. Likewise, several celebrities will express their open support for PAS (charges ranging between €5,000 and €15,000). A generous budget is also provided for “Professional Associations” (farmers, small and medium entrepreneurs, HoReCa, IT sector, etc.) – €539,500.

“Task force”, a section with no details, other than the figure of €320,000. Another budget line referring to the financing, but for which no details are provided, is “Sources”, for which €35,000 are planned.

A significant figure is allocated to the “media” component – €4.3 million. According to our sources, most of the money for the media is transferred legally, using various type of coverage, such as promoting press freedom, supporting free media in elections, promoting the right to vote, etc. The budgets prepared for other projects were redirected for this purpose, but their destination was changed in the spring, in order to motivate the press in support of PAS. Separately, a budget of €230,000 is allocated for the “international media”.

For this purpose, €1.45 million are budgeted for Moldovan NGOs. The same category includes money for “group of experts, analysts, etc.”

€120,000 are budgeted for “trolling and social media campaigning (Facebook, Instagram, Odnoklassniki (a social media network popular in the post-Soviet area), Tik tok)”. Our sources told us that people outside of Moldova, especially Romania (the two speak the same language), Ukraine, and Belarus, are also involved in this activity.

Compared to other activities, a rather modest amount is provided for “Telegram Channels” – €20,000. A little more – €58,500, are budgeted for “Caricature Production”.

Instead, a significant amount of over €35 million has been budgeted for “Voting Abroad”. According to the documents, the purpose of this money is to get at least 300,000 Moldovan citizens to vote in the Western countries, of which at least two-thirds will vote for PAS.

The secret reports also describe the process of how Moldovans will be mobilized to vote, how they will be transported to the polling stations, who is responsible, approximately how many transport units will be involved, but also how the vote will be verified. Another interesting category is “Honorarium for some members of the polling stations abroad” for which €65,000 are budgeted.

To this end, parties from the European People’s family from several European countries are mobilized to provide all the necessary logistical support and organized transportation. Law enforcement bodies in Western countries are instructed not to hinder the movement and voting of Moldovans, including those who are staying illegally on their territory (a considerable percentage).

On the contrary, they are instructed to provide, together with local administration authorities, secured parking spaces. From the same secret documents, we learn about the instructions issued about the need to identify as many transport companies in Western countries as possible, companies belonging to Moldovan citizens, in order to avoid possible allegations about the involvement of the host states in the organization of illegal transportation for elections.

Most transport units are planned to be rented in Italy (over 350), France (212), Germany (198), United Kingdom (184), etc. Organized transportation will also be provided in the US and Canada, but the number of transport units planned for these countries is in the order of tens. The Baptist Church will be heavily involved in the mobilization of Moldovans in the US.

To “persuade” some “hesitant” or politically apathetic Moldovans, “honorariums” are planned, the amount of which varies depending on the country from €50 to €200 for a vote. All those who are transported in an organized manner or who receive money for voting are required to take a picture of the ballot paper using their mobile phone, in order to be sure that they are voting for PAS. The money is to be paid in cash through Moldovan community leaders or Moldovans doing business in the host states.

As we have seen, the West has to pay a high price for democracy and the Euro-Atlantic spirit in this small country.

Rockets hit base housing US troops in Syria, no casualties