A comic book series chronicling Indian Navy’s early years was released on Friday, June 25. The launch of the second edition of the three-book series comes on the “International Day of Seafarers”.

The book launched by the Indian Navy and titled, “The Naval Journey of India – Tacking to the Blue Waters”, was published in collaboration with Amar Chitra Katha. It tracks the history of the Indian Navy from the years of Independence till today. It travels through the Indian Navy’s early years from a small unit that dreamt big, to the multi-dimensional and modern force it is today.

The book explores the Navy’s roles, as the defender of our coasts, the protector of our national security and interests, the savior in times of need, the representative of our people and Government in foreign lands, and one of the most important innovators and contributors to our country’s technology and infrastructure.

Join Commodore Sagar, his grandson Bharat and granddaughter Sagarika as they sail into another historical voyage. This time, travel with them through the history of the Indian Navy, the wars fought by our men and women in white, the missions undertaken across the world to aid, help, and rescue people in distress and learn how the Indian Navy grew into the formidable force it is today. 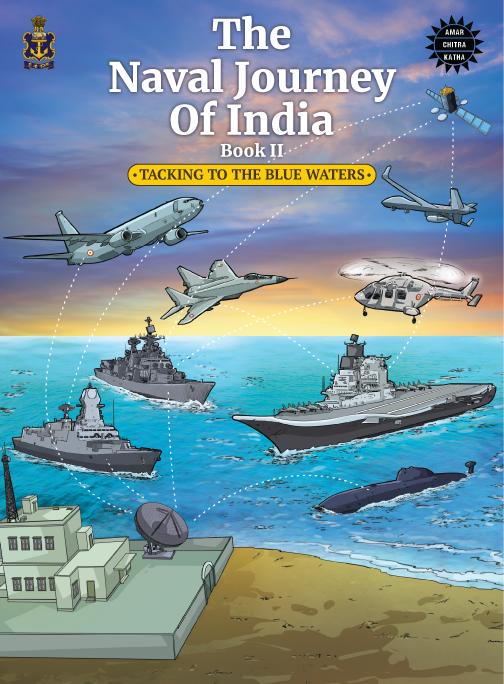 Launched last year in December, Book 1 titled, “The Naval Journey of India, Millennia of Sea Travels”, covered India’s relationship with her oceans, from the earliest sea routes during the Harappan Civilisation till 1947. The third book is also expected to be launched soon.

“It fills us with immense joy and pride to release the second book in our series about India’s Naval Journey in collaboration with the Indian Navy. At Amar Chitra Katha, our mission is to provide Indian children a route to their roots and acquaint them, inspire them and instill a great sense of pride about India in them. This book delivers on all these promises magnificently!  We hope that this book will not only generate interest in our great maritime history among young Indians but also inspire them to celebrate and perhaps even join the Indian Navy,” Amar Chitra Katha CEO Preeti Vyas said.

COVID-19: Indonesia examines use of Sinovac, Pfizer vaccines for kids