Delhi Police has busted ‘Santro gang’ of notorious criminals who had committed consecutive crimes during the intervening night of 7 & 8 June 2021. The three members of the gang were wanted in four cases of robbery committed in a single night within a span of a few hours in a silver colour Santro car including Robbery-cum-Murder of a truck driver in the area of a Punjabi Bagh.

The arrested men have been identified as Rizwan (28), previously involved in a drugs case and arms act, Shamshad (29) and Nasir (20), all residents of Loni in Ghaziabad. They were arrested from Garhmukteshwar in Uttar Pradesh.

Among the four cases, one was a robbery-cum-murder case. Police have recovered the car which the accused had set on fire to destroy evidence. 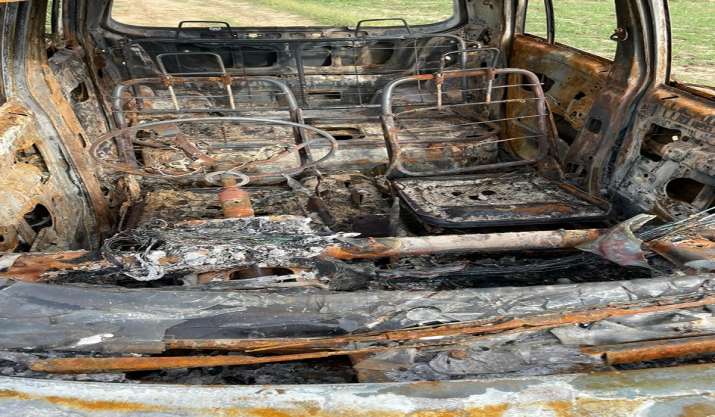 On Tuesday around 2.30 am, a firing incident took place in Singhalpur village in Shalimar Bagh area where complainant Ram Kishore told police that he heard some noise outside his house.

He came out on his balcony and saw that two to three persons were trying to steal his e-rickshaw. When he raised alarm, they fired at him and fled from the spot in a silver Santro car. The complainant had a narrow escape, police said.

Around 2.45 am, an incident of robbery-cum-murder of a truck driver took place in the area of Punjabi Bagh. The accused persons had come in a silver Santro car and fired at the truck driver and committed robbery, a senior police officer told reporters.

Another incident of robbery at gun point was reported at Ring Road, ITO subway, around 3 am where the complainant, who was going in an auto-rickshaw, was robbed of his phone, laptop and purse by three to four occupants of a silver Santro car, the officer added.

Thereafter, one more incident of attempt to robbery at gun point by three men was reported in Defence Colony area near Moolchand Metro Station, police said.

“The footages revealed that the suspected vehicle was parked at Badola village in the area of Mahindra Park for two hours and three to four men were seen there with suspicious activities. Police identified the accused persons and arrested them from Garhmukteshwar in UP,” Deputy Commissioner of Police (northwest) Usha Rangnani said.

Rizwan disclosed that after committing crime, they burnt the car in Fazalpur village, Baghpat district, the DCP said.

The accused used to steal vehicles, other valuables from people. Thereafter, they would sell them, police said. Further investigation in underway.

Science Made Simple: What Are Sterile Neutrinos?