After working with NASA on designing a human habitation on Mars as part of the 3D Printed Habitat Challenge, international design practice Hassell will now be working closely with the European Space Agency (ESA) on two projects designing a master plan for a permanent habitation of the Moon, Xavier De Kestelier, who leads the Hassell design technology and innovation, told New Europe.

The recent landing of the Perseverance rover, the development of the Artemis program and the test flights of Starship at SpaceX show an increased international drive for human space exploration.

“These are plans after the Artemis program. Artemis is where we’re getting a station gateway, a station around the moon and then missions to the moon and back. And that’s kind the big Artemis project that Europe is involved with, ESA is involved with, NASA is involved with,” De Kestelier said. “But that really goes to that stage where you have one permanent base on the moon. But what we haven’t looked at is what happens after that. So, I’m really looking at that. Once Artemis has happened, what are we doing after that. That’s what the study is all about,” he explained.

The Hassell head of design technology and innovation said his company is working on two lunar projects. Designing for space exploration is typically very technical as it literally is rocket science, but the scientists, engineers and architects are working on an overall masterplan and vision.

FLY ME TO THE MOON

The first lunar research project, which is a collaboration between Hassell and Cranfield University, will investigate a scalable lunar habitat framework, driven by a holistic and mission architecture approach, resulting in a masterplan that builds upon existing space habitation programmes such as the Lunar Gateway. “The first one is really about looking at the master plan and looking at how would you actually expand a lunar base. How would you do that?” he asked.

The second lunar project, which is in partnership with the University of Toronto, will try to create a new framework for reconfigurable robotics, going beyond the traditional robotics for space operations. The robotic system will be developed in consideration of the necessary material manipulation routines for execution of the identified construction method, as well as constraints of working in the lunar environment, including low gravity, space dust, and second / third person operation.

“The second one, is really picking up on the work done by NASA on the Mars habitat. And there we look at robotics. The idea is when you go to another planet, whether it’s the Moon or it’s Mars, we need to make sure that whatever we bring is used and reused for as many tasks as possible. So, the idea is that if we are going to do construction and we need some construction equipment or robotics on the Moon or Mars, here in this case the Moon, we can’t just send over big construction equipment. Because a lot of heavy construction equipment has one sole purpose. What we want to do is look at a completely different type of robotics or modular. Can we use robotics that are modular that can actually adapt themselves to different functions? For that, we will be making prototypes with the University of Toronto,” De Kestelier explained.

There is a real interest in the moon. “Mars is quite difficult now. The International Space Station which is going to become obsolete between I think 2024-2028,” De Kestelier said. And now NASA is pushing for commercial orbit stations where NASA is not, for example, the main agencies are not actually running it anymore, they have commercial operators running it. You do see the shift where you have the agencies like NASA, like ESA doing kind of the groundwork and the really cutting-edge stuff of being there first and then you see industry coming behind and trying to make commercial sense of that all. I think that will happen also on the Moon and Mars as well,” De Kestelier said. “For the first years, we will have agencies there – ESA, NASA and the other space agencies – and later you get commercial, maybe tourism coming. That’s the trend behind it. That’s also in our framework. We want to kind of show how that’s possible. How you can build a base, not just for agencies, but also for tourists, also for industries, manufacturing and support,” he said. 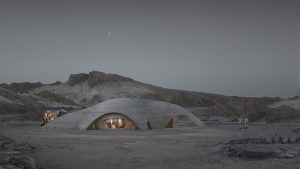 De Kestelier reminded that a trip to the Moon is only three days. “It takes almost a year to get to mars, three days to the moon. So, it is indeed much easier. The environment is quite tricky. On Mars the environment is actually less harsh than on the Moon but the Moon is not that far away,” De Kestelier said, adding, “We don’t know much about Mars. We have never been there. There is a lot of science to be done there still. So, we know a lot more about the Moon at the moment”.

The many tribulations of China's Liu He