In the first-ever show of strength, the dissenters in the Congress (G23) shared a public platform in Jammu and participated in the Shanti Sammelan, raising internal issues of the Congress like party becoming weak in the past decade, leadership, while at the same time, sharing a piece of advice for the young generation. Congress dissenters were addressing the event in Jammu at a time when Congress chief Rahul Gandhi was busy campaigning in Tamil Nadu.

Congress leaders including Ghulam Nabi Azad, Anand Sharma, Ghulam Nabi Azad among others were present at the event. All these leaders were part of the group (G-23) who earlier wrote a letter to party Supremo Sonia Gandhi, raising issues like reforms, internal democracy, leadership in the party. The programme, which saw several G-23 leaders together, was organised under the banner “Shanti Sammelan” in Jammu.

“Be it Jammu or Kashmir or Ladakh, we respect all religions, people & castes. We equally respect everyone, that is our strength and we will continue with this,” said Congress leader Ghulam Nabi Azad while speaking at Shanti Sammelan in Jammu.

“In the last 5-6 yrs, all these friends (referring to fellow party colleagues) did not speak any less than me in the Parliament over J&K, its unemployment, stripping off of statehood, finishing off industries & education, implementation of GST, said Ghulam Nabi Azad adding he has retired from Rajya Sabha but not from politics.

What Anand Sharma said at Shanti Sammelan in Jammu

I have not given anyone the right to tell me if we are people of Congress or not, nobody has that right. We will build the party, we will strengthen it. We believe in the strength and unity of Congress.

Did Anand Sharma make an indirect attack on Rahul Gandhi?

Speaking a the Shanti Sammelan, Anand Sharma continued speaking and said that appeared to be an indirect attack on former party chief Rahul Gandhi, “All of us have covered a very long distance to reach where we are today. Nobody among us has come through the window, all of us have walked through the door. We have come through the students’ movement, the youth movement.”

“Congress has weakened in the last decade. Our voice is for the betterment of the party. It should be strengthened everywhere once again. New generation should connect (to party). We’ve seen good days of Congress. We don’t want to see it weakening as we become older,” Sharma added.

“There has never come such an occasion after 1950 when there is no representative of Jammu & Kashmir in the Rajya Sabha. This will be corrected,” he added. 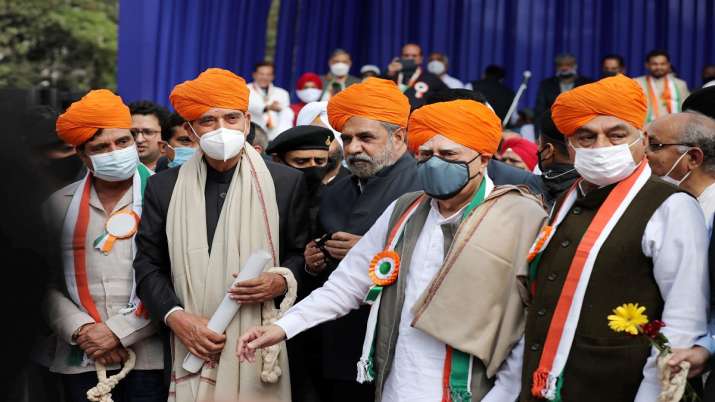 What Kapil Sibal said at Congress’ Shanti-Sammelan in Jammu?

Praising and paying tribute to one of Congress’ stalwart, Ghulam Nabi Azad who recently exited from Rajya Sabha, Kapil Sibal said, “What is the real role of Ghulam Nabi Azad sahab? A person who flies an aircraft is an experienced person. An engineer accompanies him to detect & repair any malfunctioning in the engine. Ghulam Nabi ji is experienced as well as engineer.”

“The truth is that we see Congress party getting weak. That is why we have gathered here. We had gathered together earlier too and we have to strengthen the party together.”

Kapil Sibal asks why ”Ghulam is being set free from Parliament”

Further talking about Ghulam Nabi Azad, Kapil Sibal said, “He is one such leader who knows the ground reality of Congress in every district of every state. We were saddened when we realised that he is being freed from Parliament. We didn’t want him to go from Parliament…I can’t understand why is Congress not using his experience.”

Why dissenters are unhappy with Congress’ functioning?

The ‘dissenters’ have been unhappy over the way the party is functioning and Rahul Gandhi taking key decisions within the party.

The programme is also being seen in the backdrop of the North vs South statement as Rahul Gandhi will be in the south, and controversy recently erupted after this statement by him.

Infighting in Congress far from over, say sources

Sources said the infighting in the party is far from over as Rahul Gandhi is placing people close to him in key places and seniors are being overlooked. They have not been consulted in connection with the decisions being taken for the poll-bound states.

When dissenters sidelined Rahul Gandhi after his ‘North vs South’ statement

This is the reason, sources say, that the Congress leaders, especially the G-23 members who had written to Sonia Gandhi for sweeping reforms in the party, have said that it is up to Rahul Gandhi to clarify his statement allegedly comparing North vs South.

By organising the programme the aim seems to test the waters in the state, said sources.

This show of solidarity by Ghulam Nabi Azad and the G-23 camp, which is up against the ‘Team Rahul Gandhi’ is pushing for elections in the organisation.

Anand Sharma and Kapil Sibal have been refraining from defending Rahul Gandhi, and have even sought clarifications from him.

Sharma, who is deputy leader of the party in the Rajya Sabha said, “Congress never believes in dividing the country on region and religion and does not disrespect any region. Rahul Gandhi had made certain observations, perhaps shared his personal experiences, but in what context he made that observation, he can clarify so that there is no conjecture or misunderstanding.”

Kapil Sibal said it is the BJP that is dividing the country but “what Rahul Gandhi had said he can explain in what context he made the statement.” He added that the voters should be respected from any region and their wisdom should not be questioned.

But leaders close to Rahul Gandhi are defending him. Congress spokesperson Pawan Khera addressing the media said, “The observation of Rahul Gandhi is for the kind of political culture the BJP has developed.” He rejected the statement of Kapil Sibal and said he did not listen to the whole speech.

On Tuesday, Rahul Gandhi had said in Thiruvananthapuram, “For the first 15 years I was an MP in the North, I had got used to a different type of politics. For me, coming to Kerala was very refreshing as suddenly I found that people are interested in issues and not just superficially but going into detail in issues.”

(With inputs from IANS)