Mia Khalifa tweeted a pro-Palestine message alongside photos of herself sipping wine.
In a social media post, she wrote, ‘My wine is older than your apartheid’state.’
Some people were offended by the post because the wine was dated 1943 and contains champagne made in Nazi-occupied France.

She remarked below the photographs, ‘My wine is older than your apartheid’state.’ 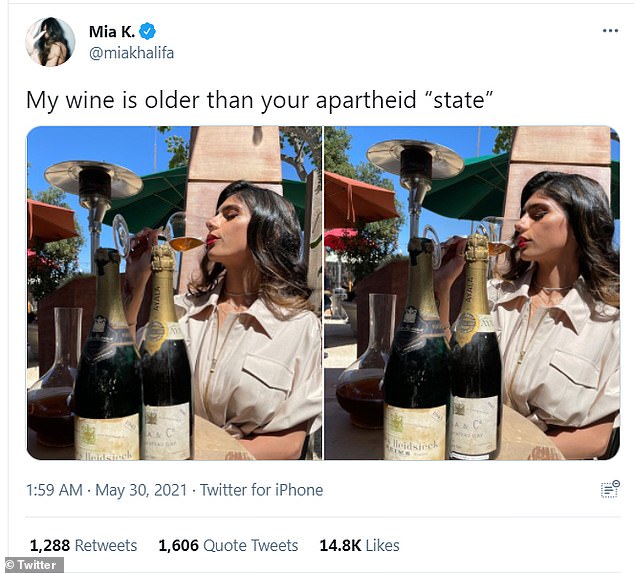 ‘My wine is older than your apartheid ‘state”, she wrote alongside the images

One of the bottles in front of Khalifa was dated 1943 and contained champagne manufactured in Nazi-occupied France, according to some online.

‘Yes, the modern state of Israel was established in 1948 — but that was ten years before Iraq’s and five years before Egypt’s. The people of Israel (and Egypt) are ancient.’

‘She should try drinking that wine in Gaza and watch how quick she rushes to Tel Aviv,’ tweeted British commentator Darren Grimes.

Khalifa, one of PornHub’s most prominent stars, is no stranger to speaking out about her political ideas, having previously spoken out on Instagram and Twitter after India cut off protesters’ access to the internet.

She joined Rihanna, Greta Thunberg, and Kamala Harris’ niece in drawing attention to major farmer protests in February, fearing that new regulations may favour big firms at the expense of smaller producers.

‘India has shut internet surrounding New Delhi amidst a farmers protest, what the f*** is going on?’ Khalifa posted on Instagram.

‘”Paid actors,” huh?’ she asked on Twitter, addressing those who questioned the protesters’ legitimacy. I hope they don’t get missed during awards season because of their casting directorship. I support the farmers. Farmers are protesting using the hashtag #FarmersProtest.’

According to insiders, the Atlanta Falcons are anticipated to trade Julio Jones to the Tennessee Titans within the next 24-48 hours

NBA playoffs 2021: How to watch Hawks vs. 76ers and Clippers vs. Mavericks online today