The Black Sea region has a huge energy potential, both on-shore and off-shore, in terms of natural gas proved reserves and renewable energy. Located at the eastern border of the European Union, it promises the diversification of convenient energy sources for the European energy market. Specifically for Romania, the 2nd largest natural gas producer in the EU, the Black Sea developments are of strategic importance and could expand the country’s mix of energy resources and regional relevance.

Focusing on the renewable offshore potential, according to a report from the World Bank, the total technical capacity of offshore wind in the Black Sea is assessed at 435 GW (fixed 269 GW, floating 166 GW). Specifically for Romania, the estimates reach a total potential of 76 GW (fixed 22 GW, floating 54 GW). Moreover, The European Commission launched on November 19, 2020, the EU Strategy on Offshore Renewable Energy, which proposes to enhance Europe’s installed offshore wind capacity from the current level of 12 GW to over 60 GW in 2030 and 300 GW in 2050. These ambitions would help the EU reach its energy and climate targets by 2030 and the subsequent climate neutrality by 2050. However, Europe has yet to see mature projects that would tap the Black Sea renewable energy potential, also because of unfinished offshore wind energy strategies of member states, Romania’s included.

The development of renewable energy sources in Romania was planned by law no. 220 of 2008 for establishing the system for promoting the production of energy from renewable energy sources. Following the first wave of renewable developments, Romania currently has installed capacities in wind energy of 3,000 MW and in photovoltaic energy of approximately 1,400 MW. These levels correspond to the objective set by the European Union until 2020, assumed by Romania, of 24% energy produced from renewables in final consumption.

After 2016, total RES capacity recorded a slight decline, due to the end of the GC accreditation period for eligible producers and to decommissioned hydro generation units. RES production has remained relatively constant since 2015, with minimal new capacity installed while electricity generated is rather low due to lower capacity factors (c.22%) of older sites.

Table of renewable development in Romania:

The generation mix is one of the most balanced in the EU, with the 19.5 GW installed capacity and resulting power generation consistently spread among renewables energy sources – RES (wind, solar), hydro, nuclear, natural gas and coal. Except for RES units which have been commissioned during the past decade, the remaining electricity generation assets have exceeded or are close to the end of their useful life. Further decommissioning of coal plants is planned along with replacement of traditional generation sources (of which coal and natural gas-fired units are also exposed to rising EU ETS prices not covered by market earnings). These assets should be replaced by new capacity, which either utilizes RES or highly efficient conventional power plants.

The graph on the evolution of the share of primary energy sources in electricity production until 2030 (according to the document Romania’s Energy Strategy 2019-2030, with the perspective of 2050, can be accessed AICI). 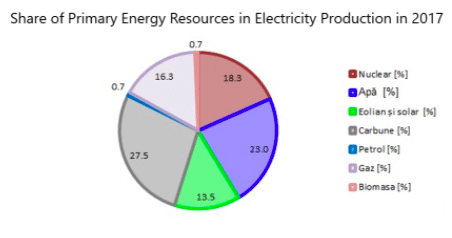 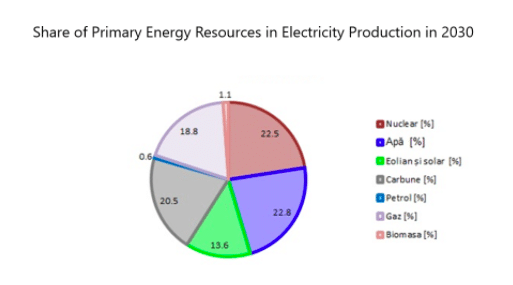 Regarding future plans, according to the Romanian Energy Strategy, by 2030 it has been estimated an increase in capacities from wind sources to almost 4,300 MW (from 3,000 MW) and those from photovoltaic sources to approximately 3,200 MW (from 1,400 MW). The values mentioned in the Energy Strategy are much lower than those in the National Integrated Energy and Climate Change Plan, which proposes new renewable developments of 6,900 MW. These new capacities corresponded to Romania’s ambitions by 2030 of 30.7% renewable. However, these objectives are now substantially undersized to achieve Romania’s new renewable target by 2030, proposed by the European Commission through the new ‘Fit for 55’ package, at 38%. Achieving this new target will require much greater ambition and developments, but we do not have it effectively and officially evaluated in generating capacity.

Since 2012, Romania has exceeded its pre-Green Deal targets (38% in 2020), with a share of RES in the gross final consumption of electricity at around 44% in the period 2014 – 2018.  Through the Green Deal, the European Commission has set ambitious targets for EU countries to reach by 2030. Romania has transposed these targets into its National Energy and Climate Plan (NCEP) and has begun implementing reforms and measures to reach them. The country is committed to increase RES energy share from 23.9% in 2020 to 30.7% by 2030 with the EU expressing a desire to push this to 38%. These ambitious targets against the existing context (aged coal and natural gas-fired plants, planned decommissioning and economic struggles to remain competitive) lead to substantial investment expected in renewable generation as well as storage during the next 5 – 10 years.

Current forecasts indicating an increase in wind and photovoltaic from 4.4 GW to 7.8 GW by 2025 and to 10.4 GW by 2030 are to be achieved by greenfield investments and replacement of existing large scale generation assets as well as facilities incentivizing prosumers (generation for own consumption). These targets are supported by implementing various non-refundable mechanisms and state aid schemes (incl. Contract for Difference) available to both electricity producers and prosumers. These mechanisms include:

During 2021 – 2023 National Recovery and Resilience Plan provides for:

Within a larger reform measure (Digitalization and transition to RES) with an envelope of EUR 200mn in incentive schemes:

Romania has strong macroeconomic fundamentals being the fastest growing economy in CEE during the last 5 years (5% CAGR GDP growth vs 3.7% for the region) and its GDP per capita in purchasing power parity is converging with leading CEE’s leading economies (Poland, the Czech Republic, and Hungary). Among others, this constant growth background is to contribute to higher future demand for electricity and higher electricity prices.

Romania’s regulatory framework has been converging with that of the European Union, with further developments expected, such as a switch to a single cash-out imbalance mechanism. Moreover, barriers to Power Purchase Agreements (PPA) have been removed, following several years of producers having the requirement to sell their generated volumes through the centralized market. PPAs are expected to become common practice and highly sought as route-to-market, given their numerous advantages.

What are Turkey’s ambitions in Afghanistan after the US’ withdrawal?